Hello stampers,
So last night when I was figuring out what card I was going to show for today's post, a friend posted on FB, that it was snowing & it was starting to stick. EEK! We had flurries earlier in the day, but with the sun out & it being 39 degrees out it wasn't sticking, so much to my dismay we are currently have our 1st snow fall of the season. I'm still holding out that fall will last a bit longer, so not ready for the white stuff especially since I haven't put on the snow tires yet.
Today's card has snowflakes in it to commemorate the first snow. Actually this card was done at Kerri & Mary's stamp-a-stack the end of the month. Both the base of the card & the layer use Always Artichoke Card Stock. The layer was embossed using the Softly Falling TIEF, Oval Framelits were used to cut out the center, then we used a corner punch to round the corners. Behind this layer, we used a tad bit smaller piece of Whisper White Card Stock that we stamped the trees from the Wonderland Stamp Set in Always Artichoke Ink, I'm not sure what set the snowflakes came from but we stamped them in Encore Gold Ink & Encore Silver Ink, before adhering to the back of the layer then attaching it to the base of the card. We used one of the sentiments from the set also in Always Artichoke Ink & punched with the Banner Triple Punch. The sentiment was backed by a piece of Silver Glimmer Paper then punched with the Banner Triple Punch. A piece of Silver 1/8" Ribbon was tied in a knot then added to the other end. 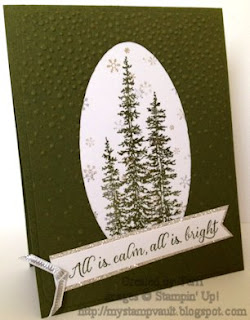 ~Thanks for stopping by!
All supplies are Stampin' Up! unless otherwise noted. 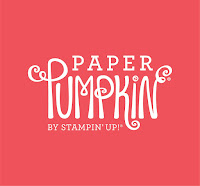